When it comes to meeting your eye care concerns, you should only turn to someone you can trust. At The Eyewear Place, we have met the eyecare and eyewear needs of countless clients like you in Fort McMurray and Lloydminster. We have a list of experienced optometrists at both of our locations who believe in providing hands-on solutions to everyone who walks into our doors. When you visit us, our optometrists carefully assess you and listen to your concerns to create customized treatment plans or suggest the right products. They work hard to create a comfortable environment where your voice is heard. Our staff has a deep understanding of the right eye care practices, enabling them to give you advice regarding eye health.

When you The Eyewear Place, you choose optometrists who value your unique needs! If you'd like to find out more about your team, you can read about them below.

If you have any questions regarding our services, you can send them to us, and we will get back to you shortly! 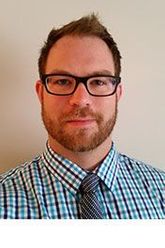 Dr. Larson has recently moved to Lloydminster and is looking forward to learning about the city and meeting new people. He is originally from Daysland, near Camrose, Alberta. He completed his Bachelor of Science at the University of Alberta in 2010. He attended Midwestern University Arizona College of Optometry and graduated in 2014 with induction into the Optometric Honor Society Beta Sigma Kappa.

During his final year of rotations, he saw a wide variety of optometry specialties. He spent one rotation in Fort Collins, Colorado, at a pediatric and vision therapy practice, one in San Clemente, California, at an OD/MD surgical site specializing in geriatrics and cosmetic surgery, one in Glendale, Arizona, at a geriatric and primary care private practice and finally one in Jacksonville, Florida, at a specialty anterior segment disease practice with an emphasis on corneal and glaucoma surgery.

He is always interested to learn something new. He enjoys spending time outdoors in the summer hiking, biking, camping and boating. In the winter, he enjoys watching and playing hockey, and spending time with family and friends. He really enjoys interacting with patients to find out how to best take care of their vision and ocular health needs. From an early age, his dream was to become an eye doctor and is excited to start in the growing community of Lloydminster.